After surviving breast cancer, my mom decided she needed to cross an item off her bucket list. She was kind enough to invite me. What was it, you ask? Well, ever since she was in her 20s, my mom has wanted to swim with wild dolphins. I never thought that swimming with wild dolphins would be an item to check off my own bucket list, but I am so happy that I said yes.

When deciding on where we should go, my mom was firm on her decision to only see dolphins in the wild. My mother has had this opinion for as long as I’ve known her (could be even longer) and she has always enjoyed the ocean. I like the ocean as well and didn’t have an opinion on captivity until my mother took me to SeaWorld when I was 12. At the park, I had so much fun learning about otters and other sea life. Then we saw a dolphin show and instead of enjoying my time, I became sad. The speaker said that the dolphins enjoyed their tricks, but every time a dolphin or whale jumped out of the water, I felt my heart sink. While exiting the show, my mom asked me what was wrong, to which I replied, “I don’t think those dolphins should be here. They should be in the wild.” It was then that I decided to never support another dolphin or whale in captivity. 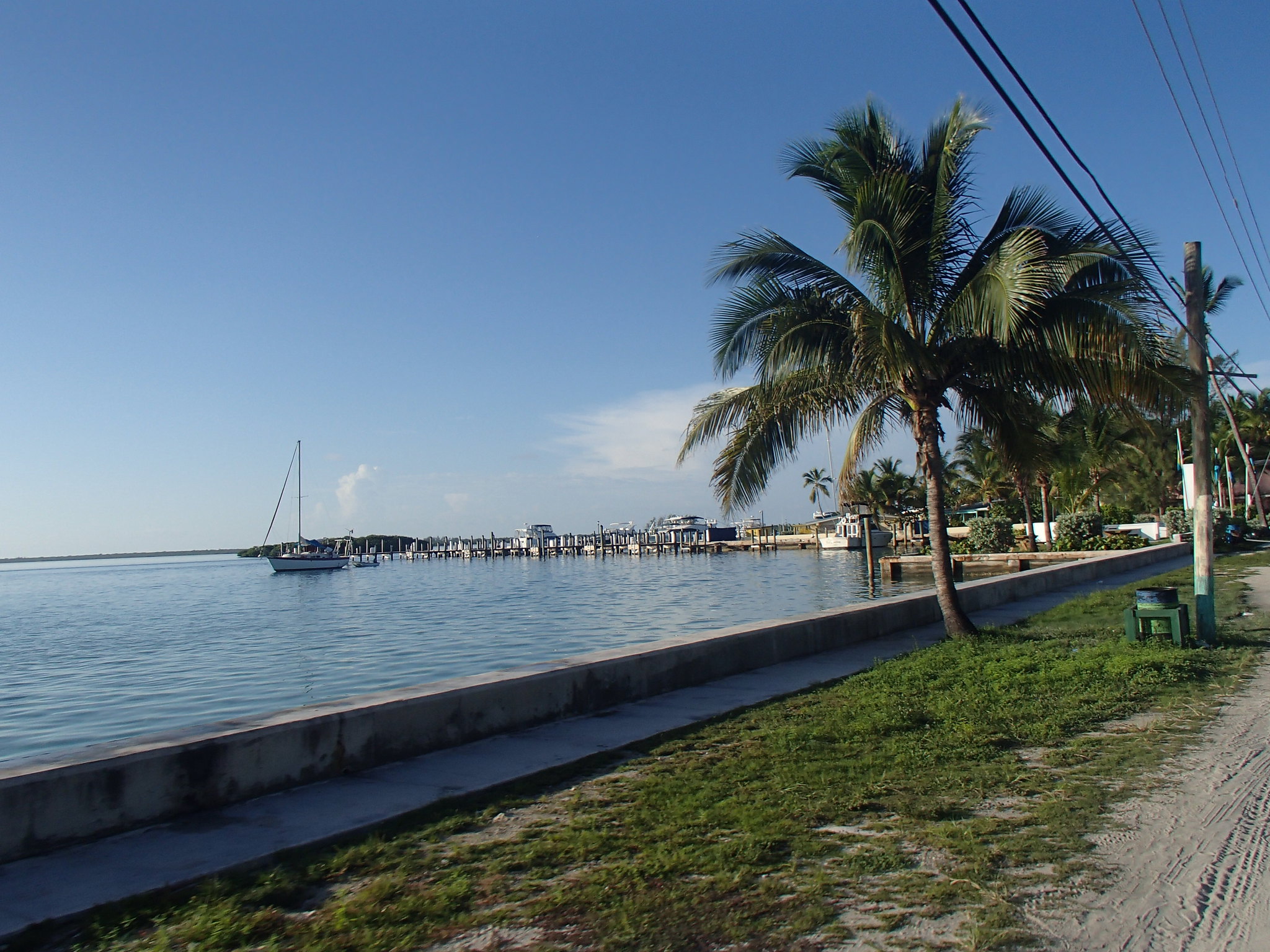 After much research on companies, my mother and I decided to book a trip with WildQuest. We chose this group because of the crew’s experience and the company’s belief that dolphins should stay in the wild. So, we picked a date and flew to the Bahamas. I know, that sounds so simple when I say it that way. But that’s what we did. 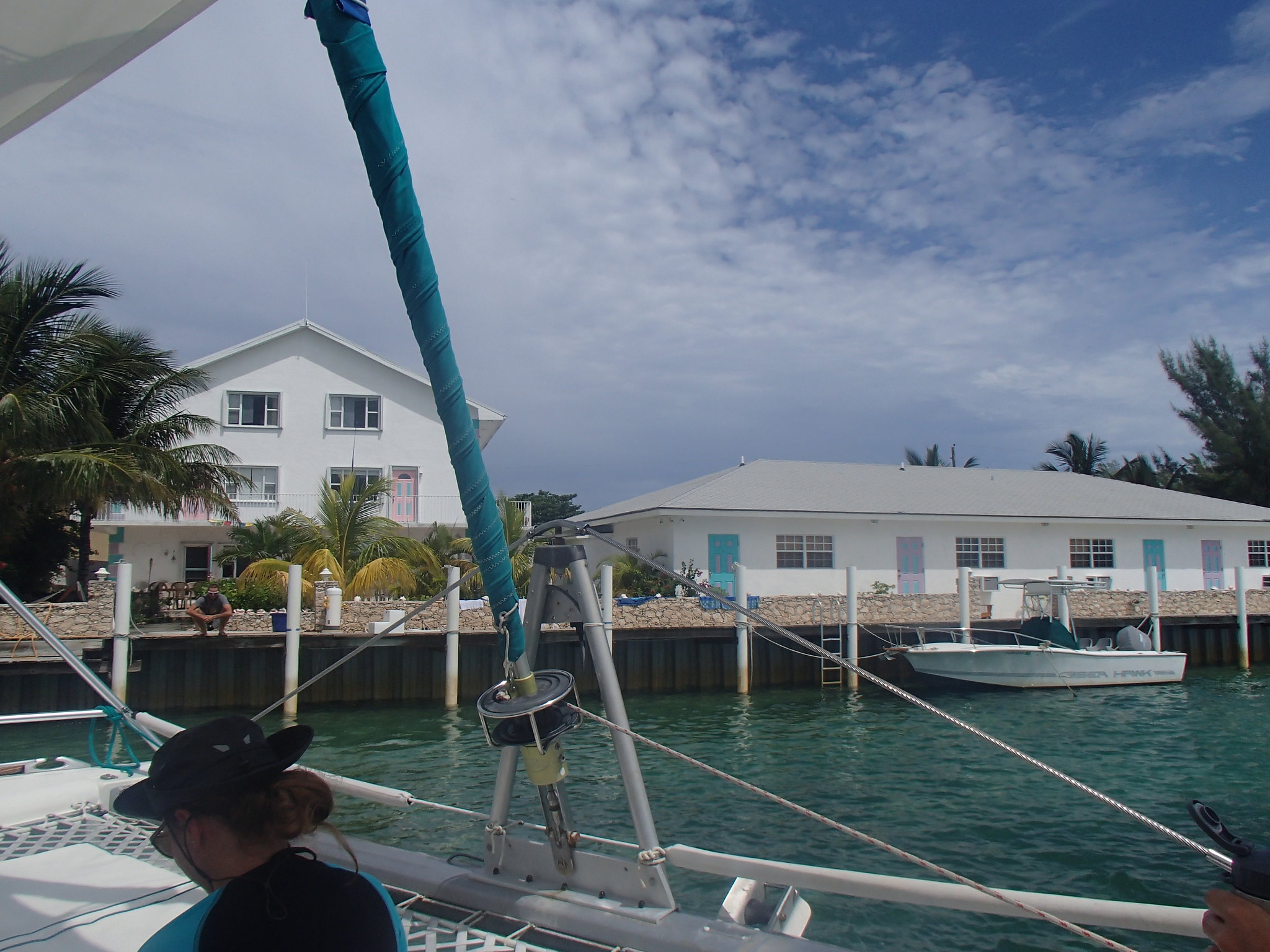 Our week in paradise was one for the ages. In the morning, we would get on WildQuest’s boat and search for a pod of dolphins swimming in the wild. Once spotted, the crew would access the dolphin’s behavior to ensure that it was safe for us to attempt to get in the water with the dolphins. Sometimes the dolphins would swim right up to the boat! It was so amazing. Well, except the first day. I got sea sick and puked the whole time. 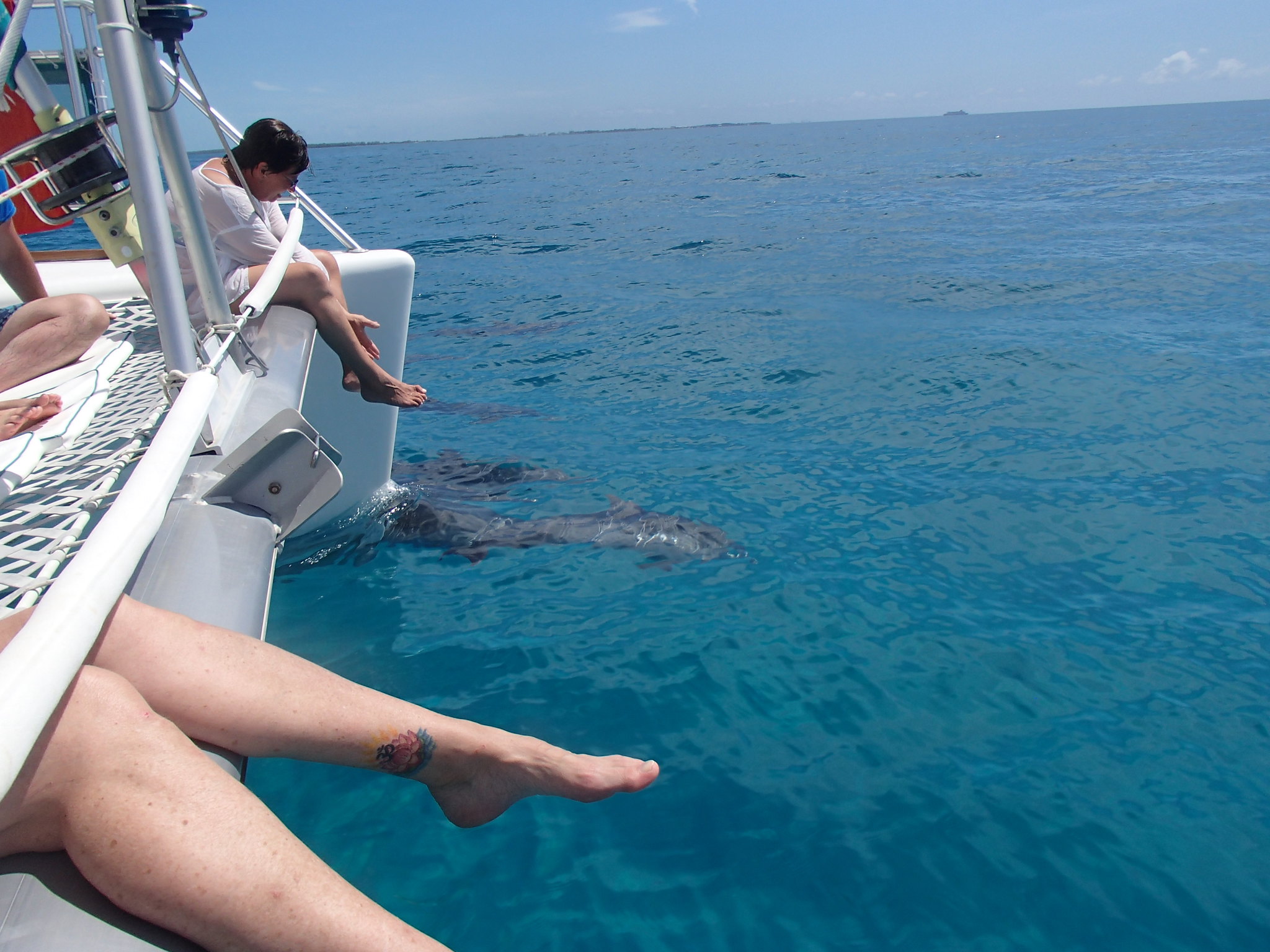 Once we received the go ahead from the crew, we put on our gear and slowly slipped into the water. The pod welcomed our presence and allowed us to swim near them. I would free dive as far as I could in the hopes that a dolphin would swim near me. And they did! This is so cliché but it was like a dance. I had to watch my partner’s steps and follow the lead. If I got too close to the dolphin, it would swim away. But if I started my own dance, sometimes it would come up and dance with me. 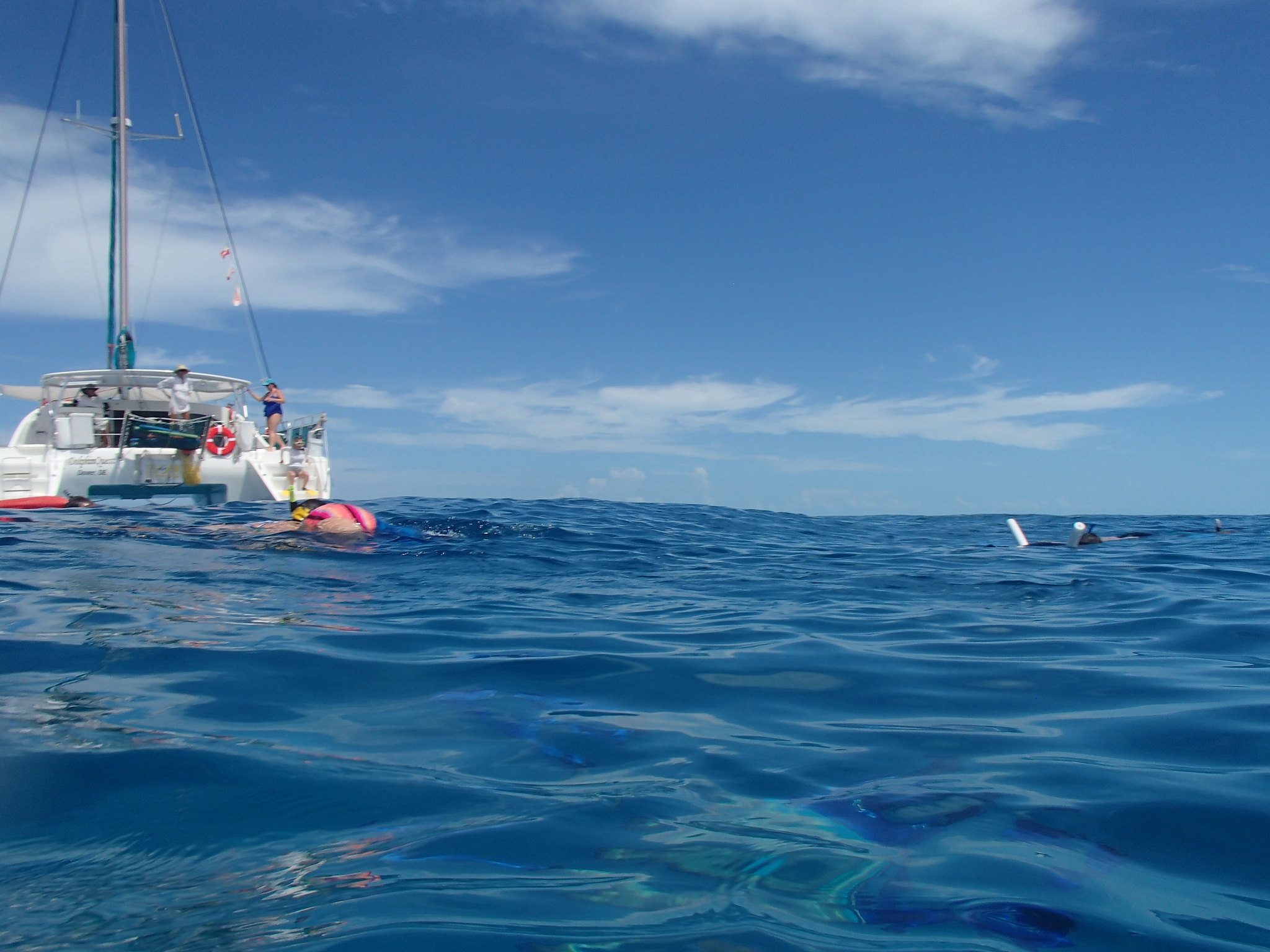 This was the most swimming I’ve done in years, but it was like another world under the water with dolphins. I would do it again in a heartbeat. There were young dolphins and older ones, and it seemed as if the older dolphins were supervising the adolescents. Okay let’s be real—the adults were supervising the adolescents. The dolphin’s behavior was how one would expect: The adolescents zipped through the water full of energy and excitement. While the adults were calm, slowly moving through the water. 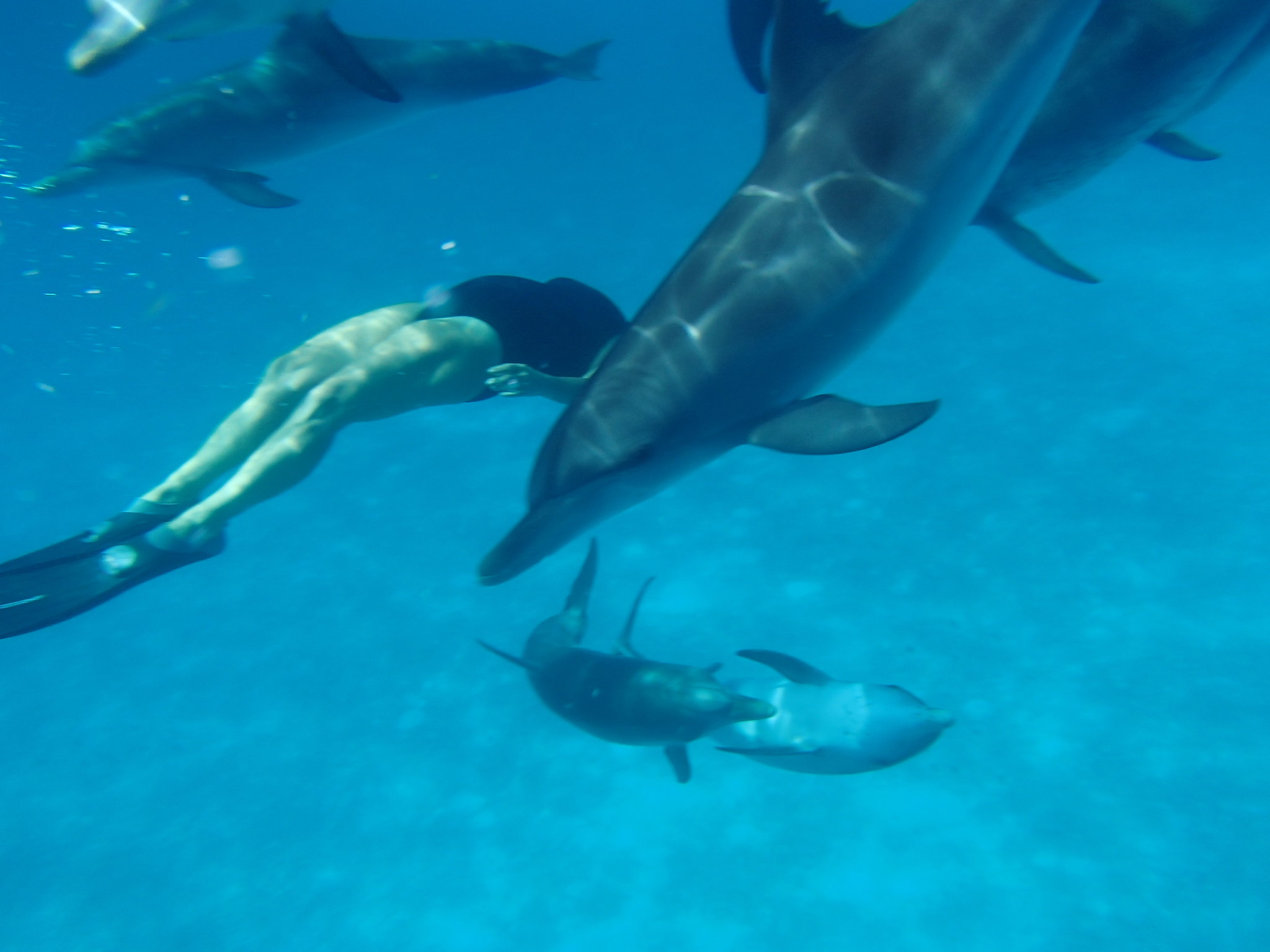 Swimming with the older Atlantic spotted dolphins has been the most blissful experience of my life. I love how they just cruise through the water enjoying life. No rush, no worries, just enjoying the moment.

I did my best to swim in the water next to the dolphins and hold my breath as long as I could. I wanted to capture every second I could with these amazing animals under the water. It was quiet in the salt water, my brain turned off and I only looked at what was in front of me. The spots on these dolphins reminded me of wrinkles, you earn them with time and they show the world how badass you are. Life is hard, and wrinkles show how long you’ve been able to handle the bullshit.
While under the water, I seriously felt like one of the dolphins looked in my soul and told me to slow down. Be Here Now. Stop worrying about where you are in life and enjoy the present. I’ve heard this time and time again, and it couldn’t be truer. That moment in the water with the older Atlantic spotted dolphin is my favorite experience in my life thus far. 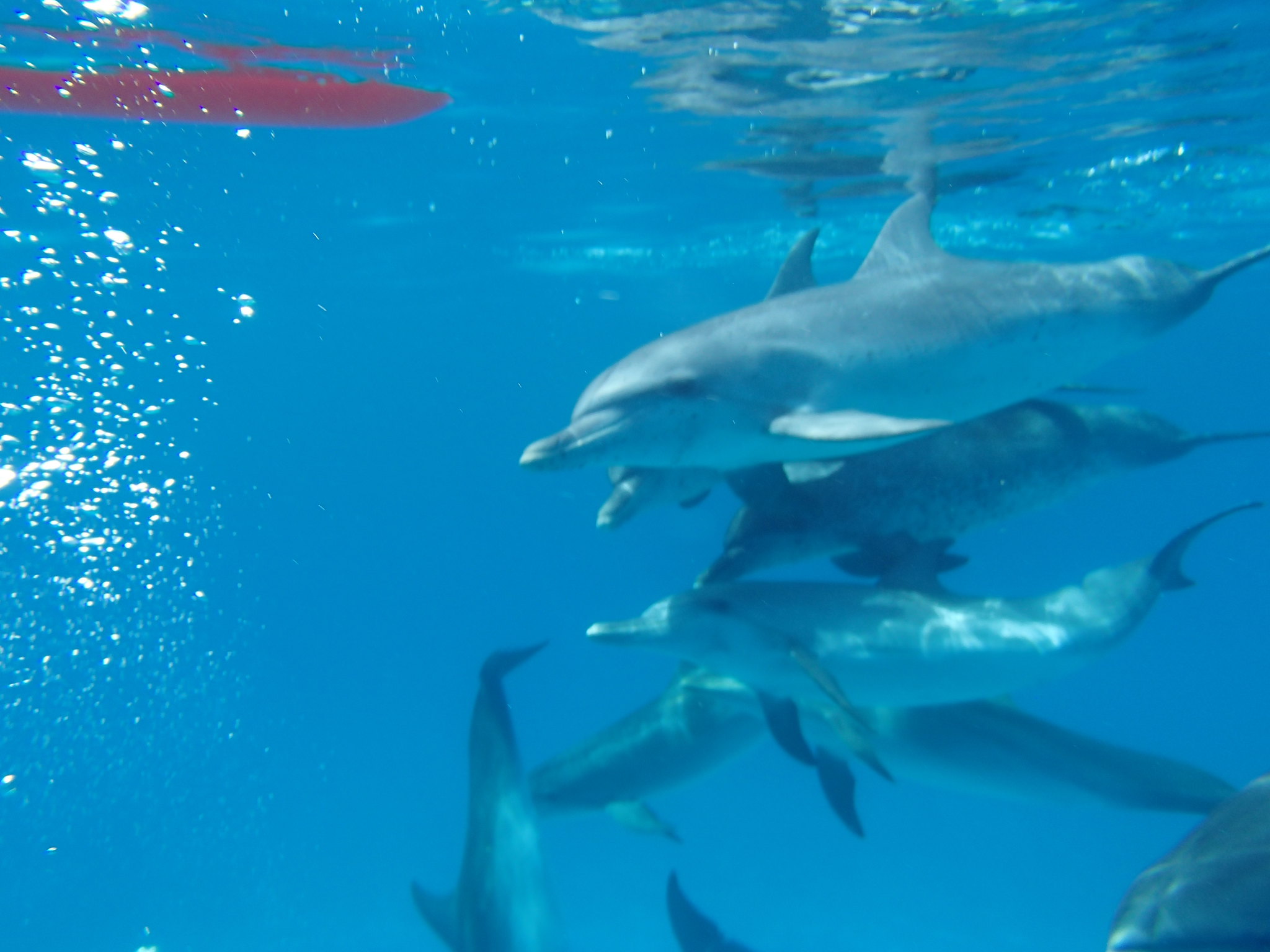 Then, the dolphins had their fill and swam away. So, we went snorkeling and enjoyed the rest of the sun as I worked on my Bimini glow. As I sat in a hammock looking at the sky, I thought about all the people who buy tickets to dolphin shows. I don’t think they realize how much a dolphin changes in captivity. This experience has furthered my belief that dolphins and whales should stay in the wild and not in captivity. I’m not a scientific expert, I’m just a human experiencing the wild as an observer.

Overall, my trip to Bimini with my mother was amazing thanks to the crew at WildQuest. After a tough time fighting cancer, I am so happy and grateful that I could spend this time with my mother. It was great to see her smile. This has been an amazing experience and has created memories that I will keep for a lifetime.

A Stormy Day at the Lake

Walking by the Three Wise Gnomes Sometimes I want to travel back to Turkey JUST to grab a glass blue eye. My college roommate didn't realize what it was and threw mine away 😢 Maybe once the world opens back up again I'll fulfill this...

There is this ski run called "Hidden Splendor" and I have been craving Hidden Valley Ranch ever since.
😂 I don't even eat ranch dressing!

Through The Battle Smoke: https://youtu.be/ktTeKPs8Qoo #NowPlaying